Caught in a Thicket

Caught in a Thicket

If I were to attempt to summarize Alex Kremer's work in one word, I would choose the word 'thicket': the branches of a bush or a tree caught together, or, metaphorically, a 'thick' matter, a complex thing.

Standing in front of Kremer's Landscape, Van Eyck's famous painting came to mind (some reckon it a self-portrait):

That this painting is very different from Alex Kremer's painting is visibly clear. But there is, however, something that bridges these two works, some six hundred years apart. Both, if one roughly divides the composition, are composed of two vertical sections. In Van Eyck's painting, above the head, and in fact, from within the head, something grows. I write "from within," because, the wrinkles of the painted figure, to my mind, should be viewed in relation to the virtuosic folds of cloth. At the moment the wrinkled skin and the folds of fabric are seen as emanating from the same internal force, this work can be comprehended. In other words, one can see the ramified folds of cloth as a glorious pictorial externalization of the interior world of thought and emotion. And this is precisely what happens, in a very different painterly language, in Kremer's painting. The large signature covering the breadth of the canvas is the equivalent of the head in Van Eyck's painting, and the thicket is the turban. The important point is that, as in Van Eyck's painting, the signature is a direct extension of the thicket. It grows out of the thicket, but the thicket also grows out of it: "Kremer" is the one who created this painterly thicket, but what arises out of the thicket is once again, "Kremer." He is caught in the thicket, caught in himself.

The signature "Kremer" is not only an official stamp on this painting, but the heart of the matter. In other words, the word "Kremer" does not say "this is a painting by Kremer," but rather, "this is a painting about Kremer." The painting is understood, accordingly, as the creation of the self. It is signed not at the moment someone buys it, as a sign of commercial authenticity; it is signed when it is completed, as a sign of personal authenticity. Alex Kremer signs his painting for himself, not for the buyers of paintings. Moreover, these signatures declare the painter's fundamental ownership of these paintings. These paintings are entirely a signature.

The signature in Kremer (Self Portrait) above introduces another characteristic of Kremer's work. Here too the signature is not a marginal matter (and therefore it is unimaginable that the artist would paint his signature on the back of the canvas, as some do). The inscription of the name is the climax of the painting: it is the moment of understanding that the thing depicted in it – not only the body, but the entire surface of the canvas is "me," "Kremer." The name of the artist is greater than the boundaries of his body. The signature connects three things in this painting: the world (the room) – the letter "K"; the body – the letters "rem" and the canvas and the painting – the letters "er". Imagine this "Kremer" as a needle, sewing: this needle is exactly what a painting (or any art) does: reworks the world, through the body of the artist, into a representation.

The signature in this painting exceeds the limits of the canvas, in the simple physical sense. Something beginning (with 'K') inside the "world" (the room in the painting) strives, and even succeeds in erupting back into the world. The letter runs over the right side of the canvas into the space where we, who are gazing at the picture, stand. The signature is then understood as a breaking through, an outreached hand, a returning of the painting to the world.

In several of Kremer's paintings there is an intimation of this movement, this breaking out. Thus in the painting Walking:

A typical Kremer painting is endowed with a sort of nervous tension that cannot be handled but by standing directly in front of the painting. Therefore the painting offers you, sometimes, an exit, hurling you beyond itself. It occurs symbolically with motifs such as traveling cars, buses climbing an ascent, the prow of a ship, flying arrows, and out-of-bounds signatures, but also in a material sense, in the way in which Kremer uses color. For example in this painting:

This is an unusual still life in Kremer's repertoire: the skull of a wolf. It is a dramatic skull, painted in white impasto. The thing that stands out most in it is the opposition between the motif and the act of painting. That is to say, a dead motif that is constructed with immense vitality.  The teeth of the original skull are replaced by impasto "teeth" that can be touched. They seem to have passed over from the motif, the predatory wolf, to the painting hand and to the medium itself. The painting is like the act of becoming a wolf: taking the spirit of an object and metamorphosing it into an emotional and painterly rhythm. It is a painting that bites, although the wolf's jaw is not open. The bite turns from the canvas toward us, just like the gaze of the man in Van Eyck's painting, and like the gazes of the "beckoning" figures in Renaissance painting in general. "In an istoria I like to see someone who admonishes and points out to us what is happening there; or beckons with his hand to see; or menaces with an angry face and with flashing eyes, so that no one should come near; or shows some danger or marvelous thing there" [2] Alberti meant the figure's gesture in the painting, of course; Kremer's paintings have no such figure, but the painting as a whole, its material, engages in invitation, points at you, sometimes to alert you to a "danger" sometimes with a "angry face." This painterly bite is an inviting bite. It is a bite that calls not for retreat, but for engagement. Therefore, when facing a painting by Alex Kremer, one must bare the teeth of the gaze.

Kremer's paintings refuse the "precise measure." More exactly, they strive to achieve their own private "precise measure" by combining two types of "excessive measure": surplus and deficit. At first glance, the language of these paintings is the language of surplus. To speak of the wolf's skull as a "biting" painting is one expression of this. But it is important to notice how, aside from the excesses with which Kremer loads his paintings, he is careful to balance them with surplus' "anti-matter" – deficit, the empty, the effaced, the disassembled: engraved outlines of a painting women, who remains hollow; outlines of bottles in another painting, erased facial features, a suggestion of the space beyond the border of the cloth, an object left white, open, a grid that was constructed and collapsed in the painting, a paint blotch indicating a kind of blue firmament in the upper part of the painting, an open exit out of the thicket.

Kremer's movement in painting from "surplus" to "deficit" stabilizes his works, preventing them from overflowing, planting a seed of silence within the cascade of colour and the traces of the fervid act of painting. Alex Kremer's art is that of creating an equilibrium between two extreme masses, like a circus acrobat balancing a pole with an elephant on one end and on the other – a feather. This struggle cannot but pass over the eyes of the observant spectator, because the spectator must remove this intensive pole from the hands of the painter, that is, truly look at these painting. Search, after the initial flooding, after being washed over by the painterly force, for the regions of emptiness, vulnerability, weakness, or quiet.

Gaze again at the body of the painter beneath the red "Kremer": compared to the way in which the cloth and the room are painted, his body is almost lacking existence there, it is empty. It is not God who ceased his work and said "It is good" in regard to his handiwork, but God who understood, at the moment his work was completed, that from here on he himself, as one who created this world, is destined to be emptied and exiled from the place he had created. The thicket was created, and it left behind it, for a moment, the body that created it and was emptied. Thus also, in the painting In the Studio: the painter draws for himself a kind of frame (within the painting), secreting himself away from the world, a world that has already begun to spread out and expand beyond the dimensions of the one who created it. Imagine God gazing at himself in the first mirror he created, and discovering with astonishment, perhaps with sorrow, that he is about to disappear, to merge with the world he has created. 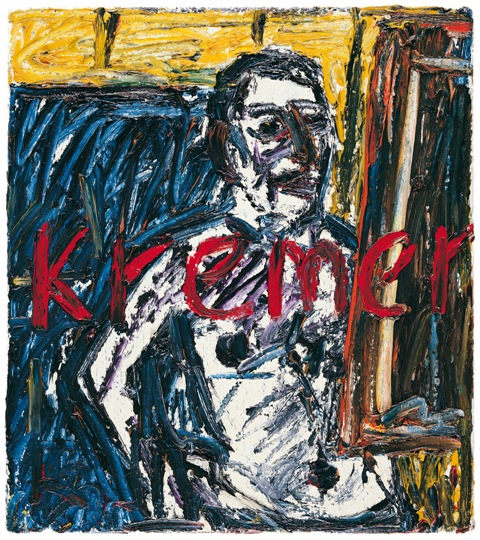 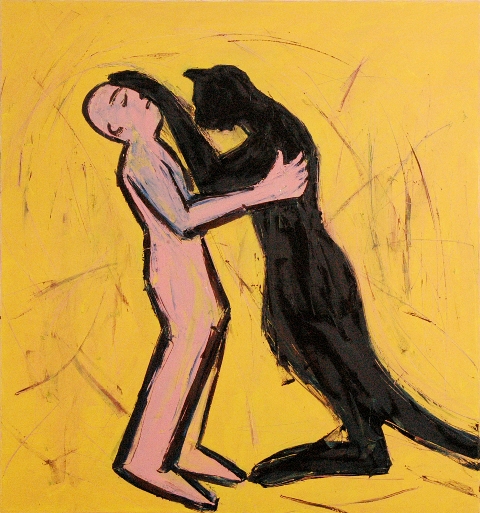 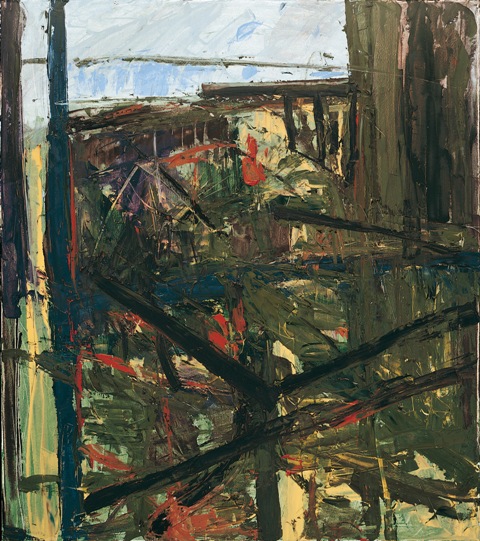 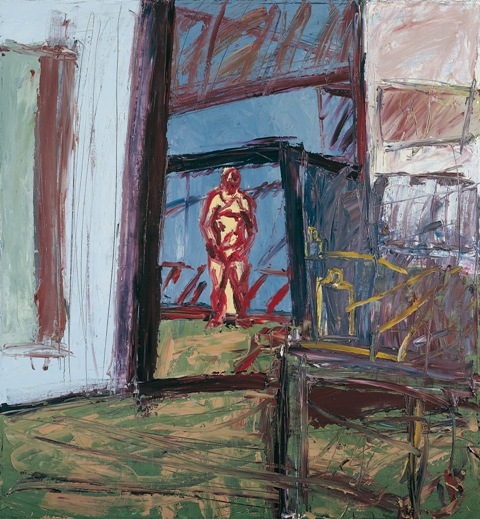 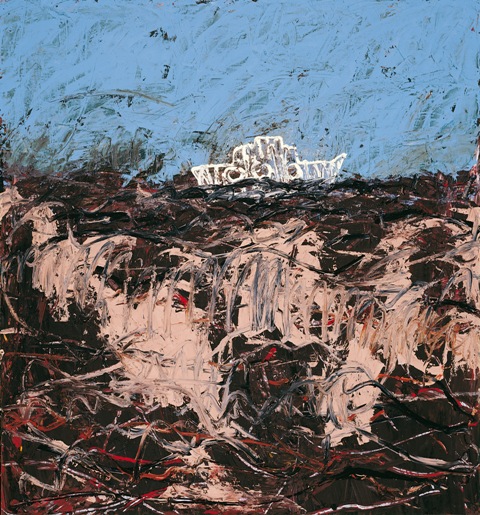 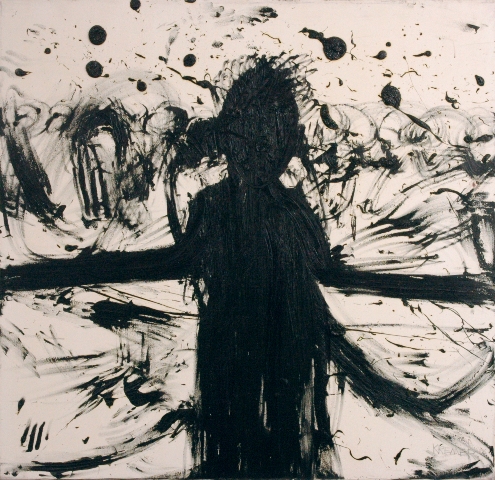 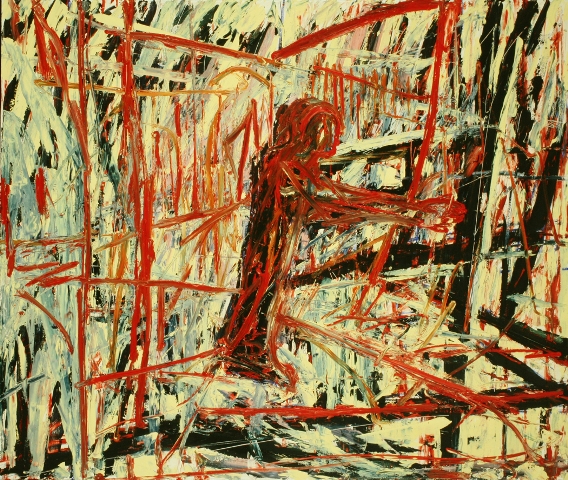 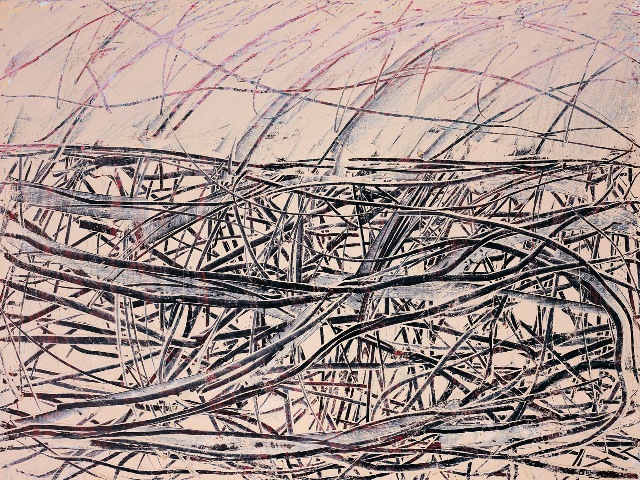 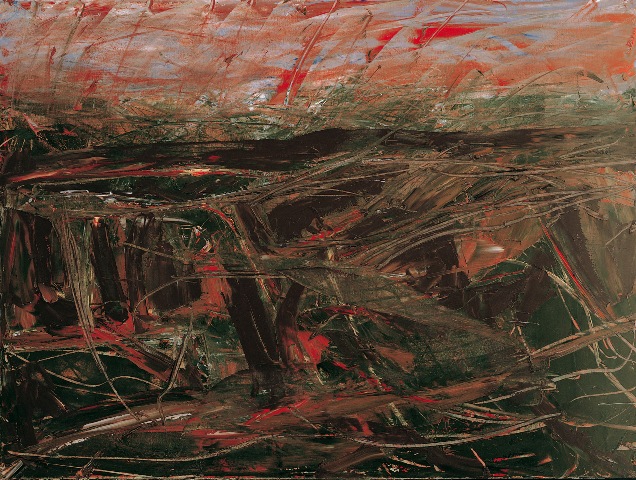