Gordon Gallery is pleased to present, for the first time in Israel, a solo exhibition dedicated to French-American artist Louise Bourgeois (1911–2010), one of the most prominent and influential artists of the 20th century. A groundbreaking, award-winning artist, with a career spanning nearly seven decades, Bourgeois left behind a body of work rare in its material diversity and emotional intensity. She produced a rich symbolic and figurative language, transposing the human body with architecture, animals, objects, and plants. At the same time, she developed an eccentric form of abstraction which, in part, stemmed from her early studies of geometry. All of Bourgeois's images and forms articulate a range of universal human emotions, including desire, anxiety, loneliness, pain, and anger.

In 1982, Deborah Wye curated Bourgeois's first retrospective at the Museum of Modern Art, New York, which accelerated her acceptance and international success. A first retrospective in Europe, at Frankfurter Kunstverein, Germany, followed in 1989. Since then, large-scale solo exhibitions of her work have been staged in numerous museums the world over, and she participated in major international art events, including Documenta in Kassel (1992, 2002) and the Venice Biennale (1993, 1999), where she was awarded the Golden Lion for a living master of contemporary art. In 2000, at the onset of the new millennium, Bourgeois's site-specific installation I Do, I Undo, I Redo was created as a special commission for the Turbine Hall. This monumental work, along with her 30-foot spider sculpture, Maman (1999), inaugurated the opening of Tate Modern, London.

The exhibition at Gordon Gallery focuses on Bourgeois's prints, mainly those created in the last decade of her life. Throughout her extraordinarily fertile artistic career, printmaking was a mainstay of her oeuvre. From 1938, the year in which she made her first print—a small lithograph entitled St. Germain—to final works created close to her death, prints were a testimony of her creative process and various mindsets. From the 1940s, Bourgeois kept a small press at home, which enabled her to make prints independently, alongside her long collaborations with different print workshops in the United States and Europe. Though primarily focused on intaglio, she ultimately worked in several different printmaking techniques (including lithography, screenprint, and digital prints).

Printmaking, drawing, and their reciprocity formed the frame on which Bourgeois's well-known sculptural works evolved, as well as the Cell installations she created later in life. In 1994, a retrospective dedicated exclusively to Bourgeois's prints was staged, for the first time, at the Museum of Modern Art, New York. A second exhibition focused on the prints will open at MoMA in September 2017.

The works presented at Gordon Gallery explore quintessential motifs identified with Bourgeois: the mother-spider, the family, the passage of time, motherhood, and the natural world. Several pieces are printed on fabric, indicative of Bourgeois’s late work with clothing and textiles. In the last decade of her life, following the incorporation of her own clothes in sculptures and installations since 1996, Bourgeois began using old handkerchiefs, bedding, and clothing as grounds for her prints. Subsequently, she created printed fabric books made from pieces of cloth, worn and characterized by their domestic use.

Bourgeois’s late practice of working with fabric was connected to her first childhood experiences of art. As a young woman, she helped out in her family’s business—a tapestry weaving and restoration workshop—where she was often required to draw in the faded, blurred, or damaged elements of antique tapestries.

The title of the exhibition, "Pink Days / Blue Days," is taken from a sculpture of the same name, created in 1997, in which garments hang at various heights off of a central steel pole. It also alludes to the expression "pink days," written in pink over the pages of a music notebook, which Bourgeois made in 2008. For Bourgeois, the color pink represented femininity and happiness, while blue was symbolic of melancholy and depression. Blue could also represent the sky, which in turn expressed feelings of escape and of being overwhelmed.

The exhibition includes, among others, the seminal series Hours of the Day—25 printed, embroidered cotton panels, hung high up on the gallery walls like a frieze—as well as prints from the heartrending 1998 etching series Topiary: The Art of Improving Nature. A suite of nine compositions, it addresses the concept of pruning and felling the hollowed body as a therapeutic act, spurring it for budding and renewal, much like a plant. In some of the images, with a fine drypoint line, Bourgeois drew a headless body encased in the shell of its garments; its knee and shoulder joints are accentuated with pink stumps, which could be foci of regeneration for its missing parts. Against nature’s forces of destruction and decomposition, Bourgeois harnessed its opposite, introducing regeneration and eternal repetition as focal points of life and renewal.

The prints on view at Gordon Gallery reveal, for the first time in Israel, the umbilical, Gordian knot between Bourgeois's art and the medium of print. 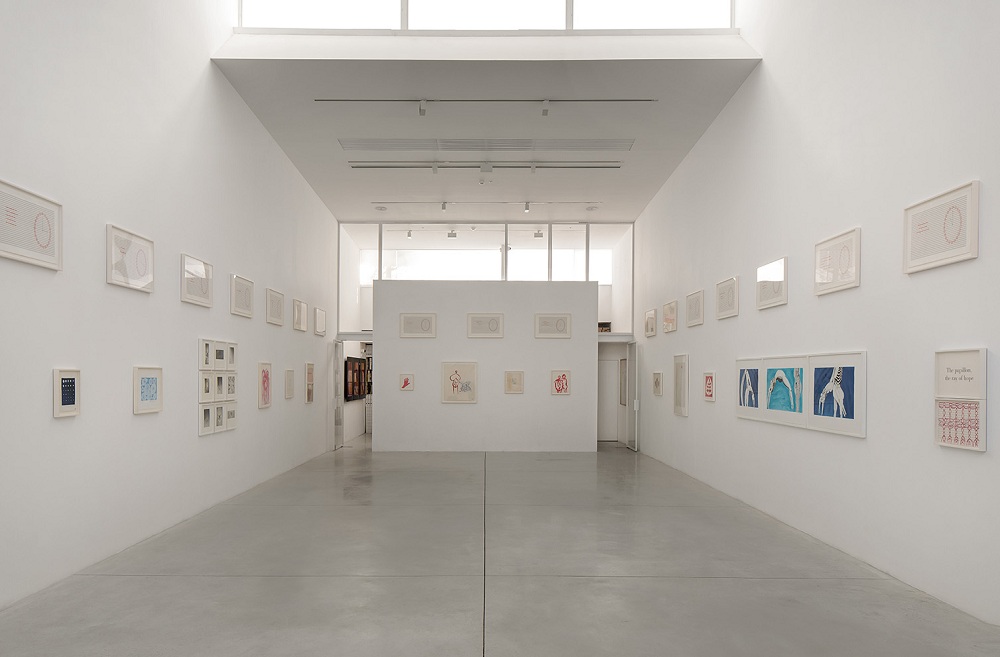 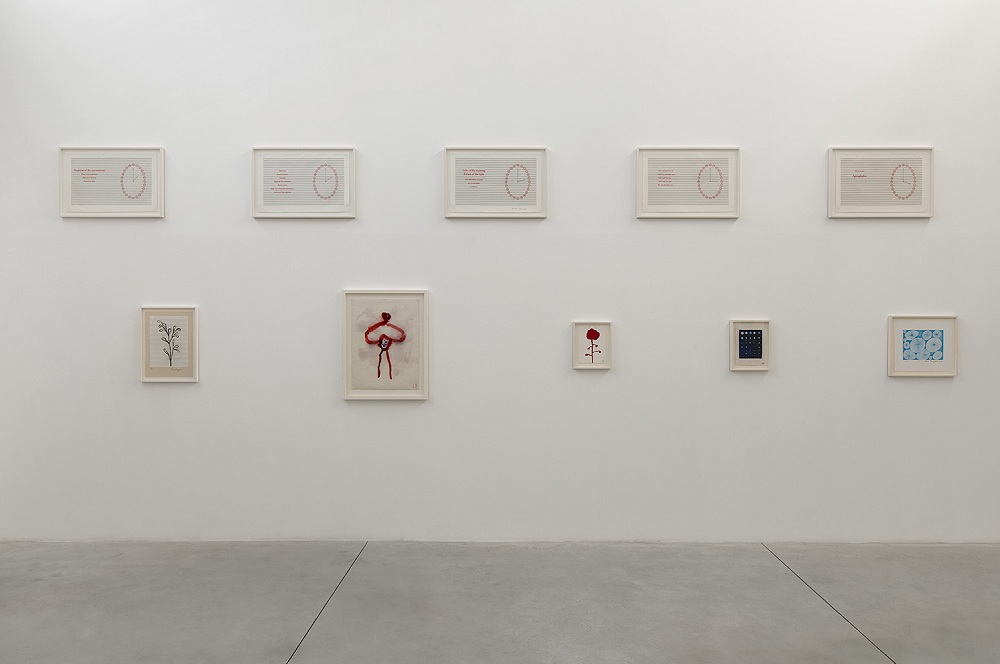 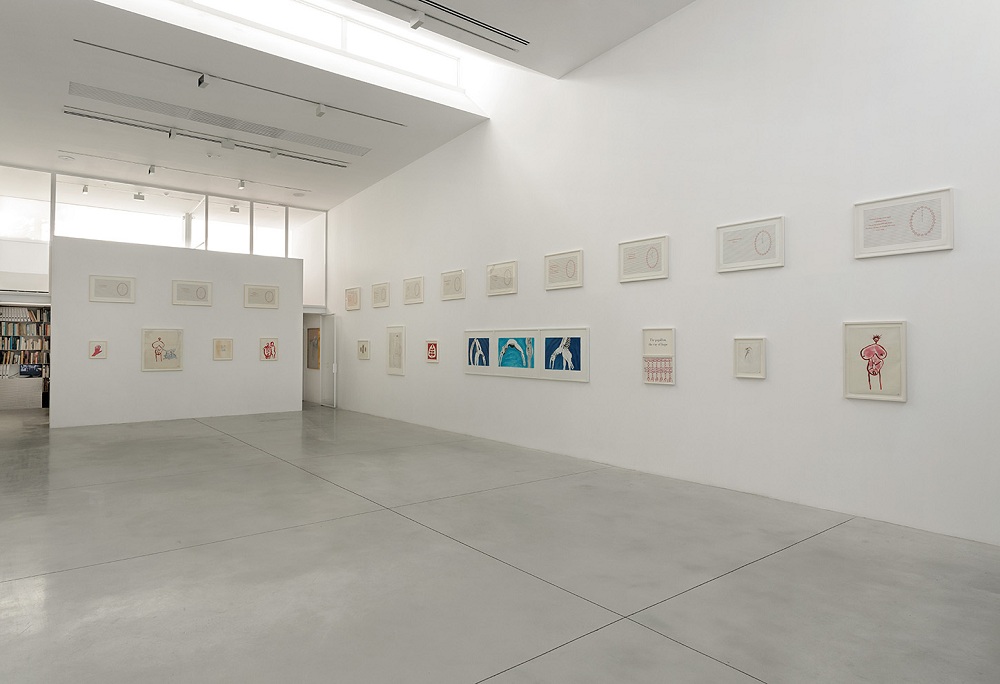 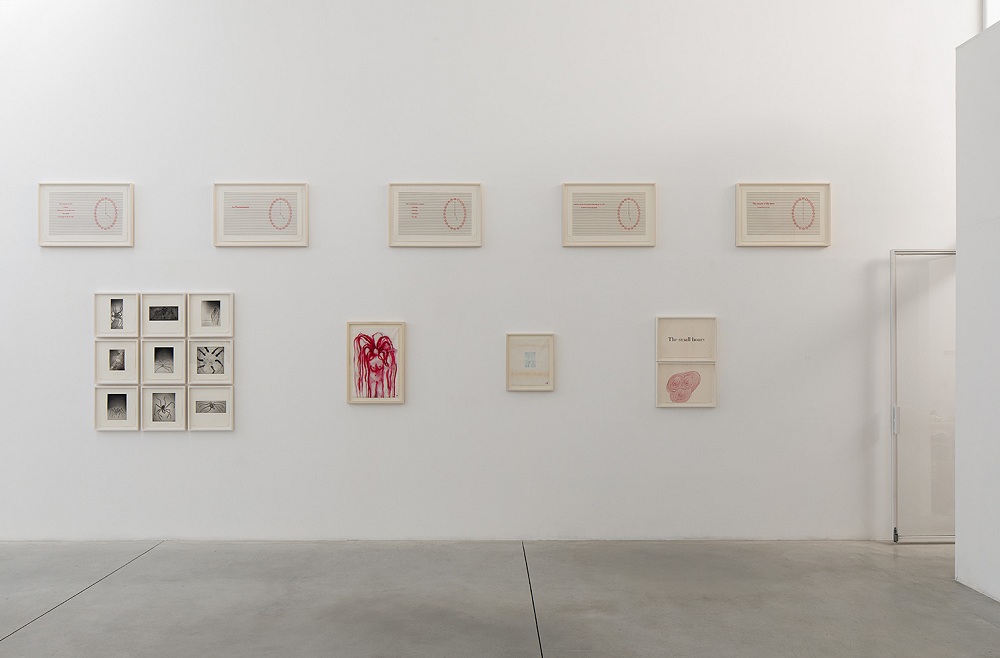 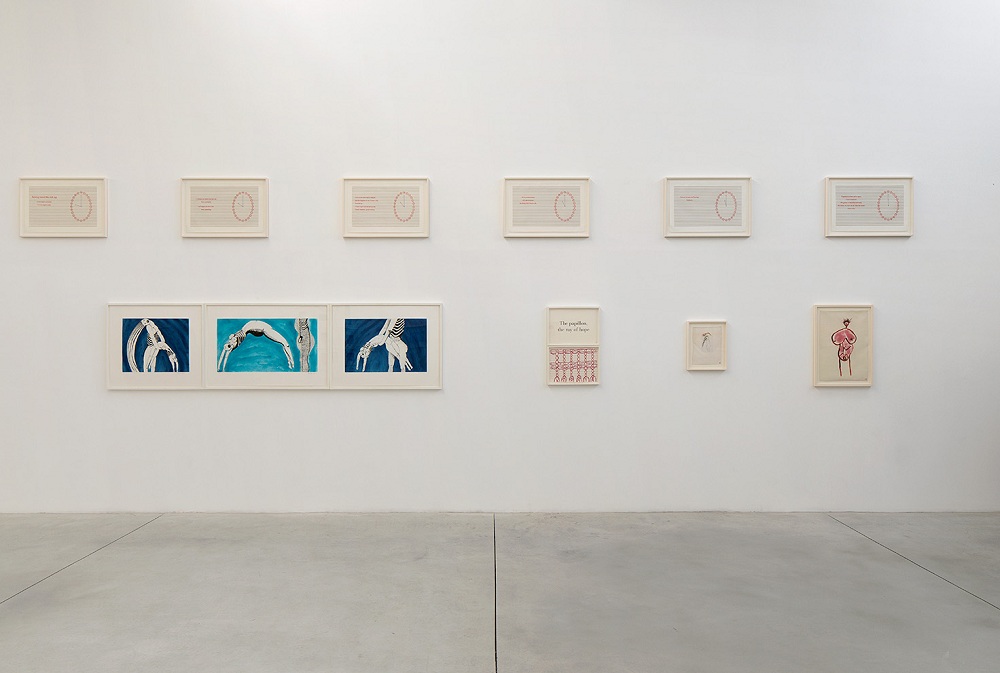 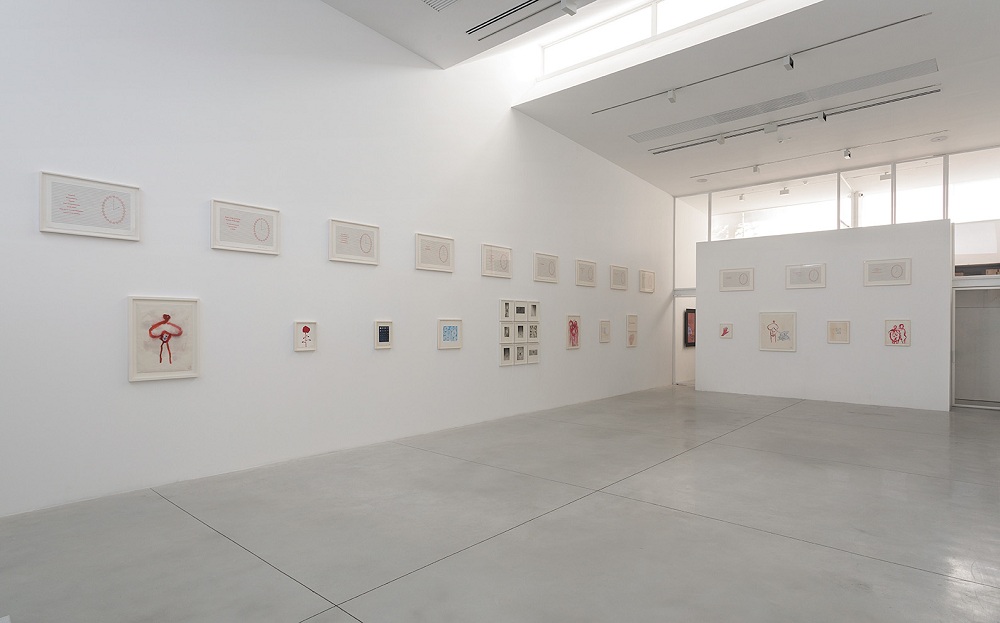 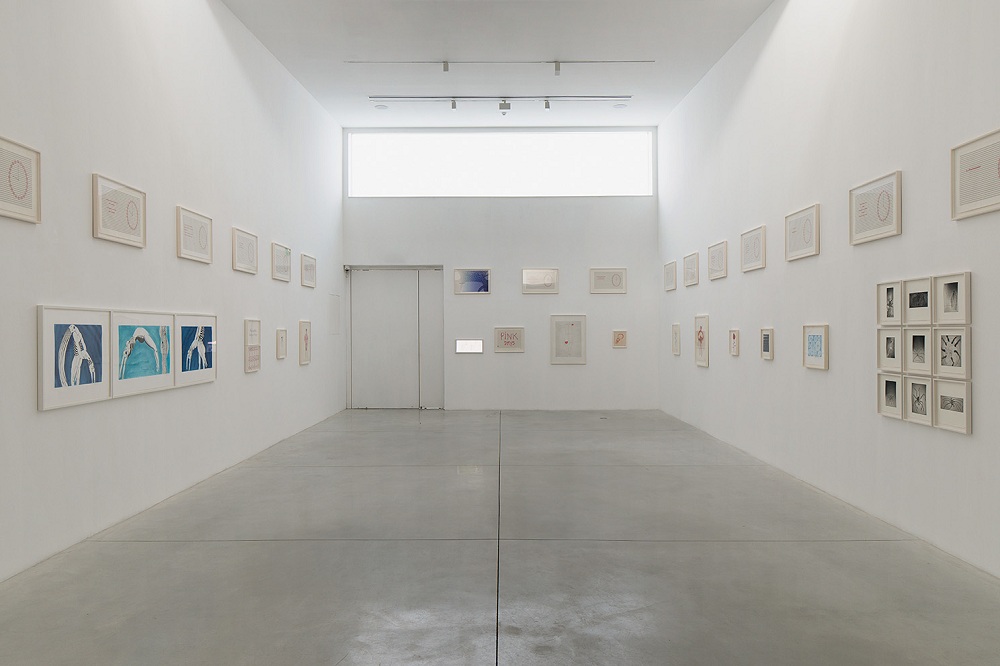 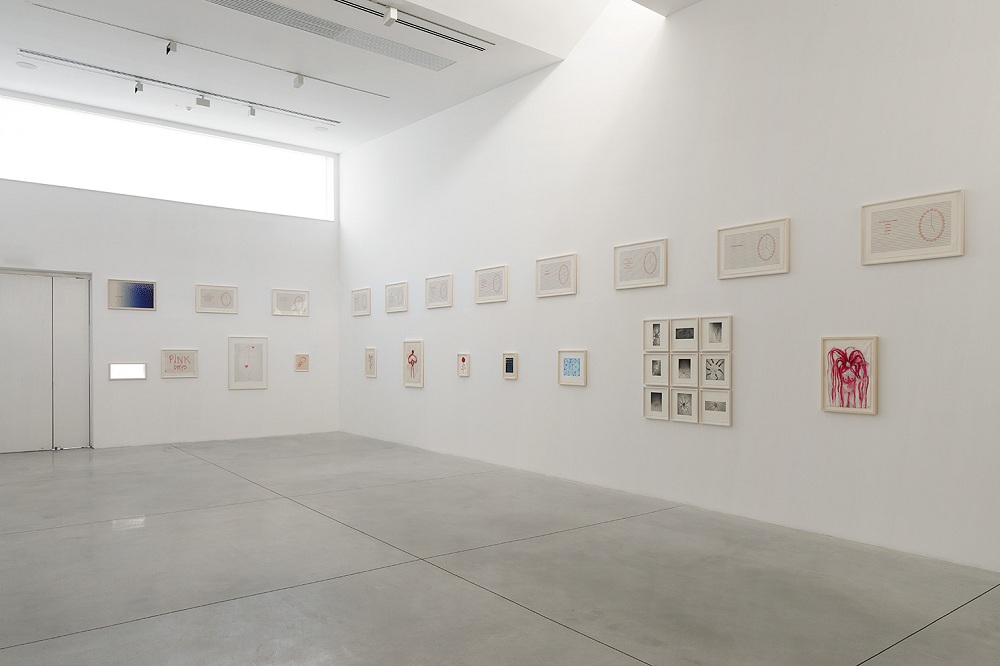 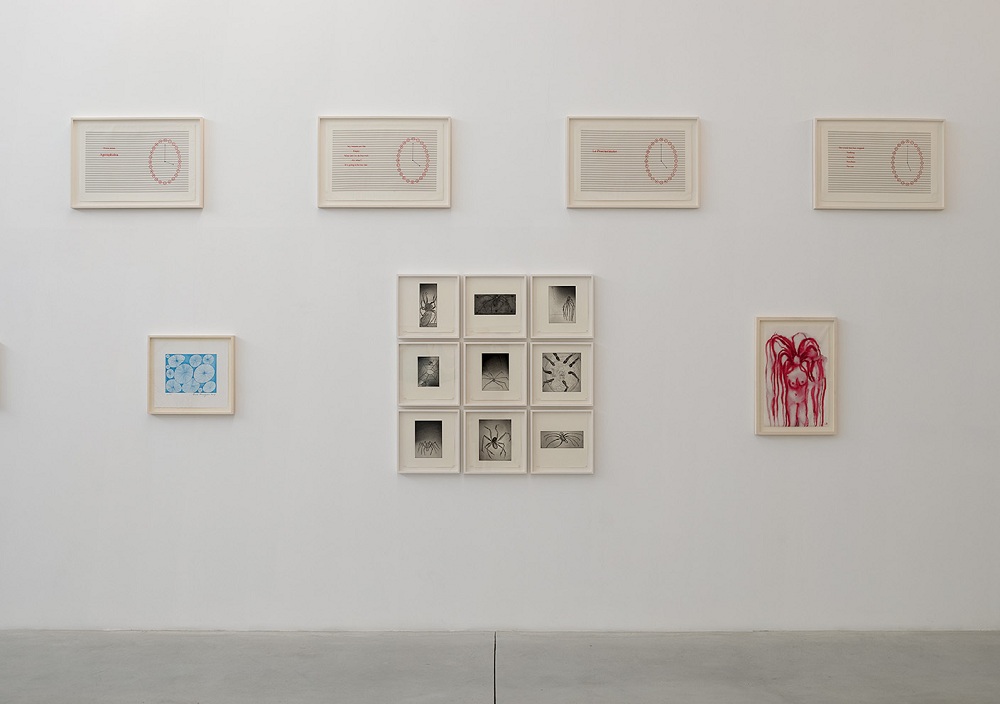 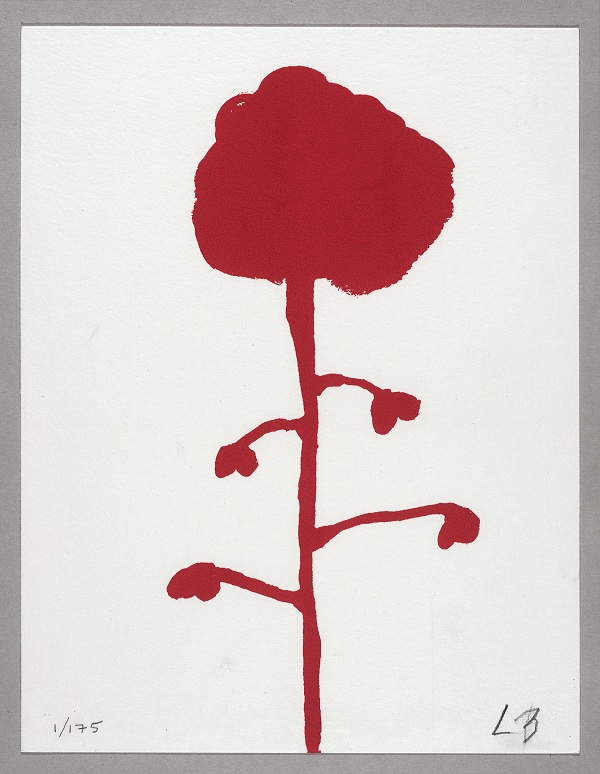 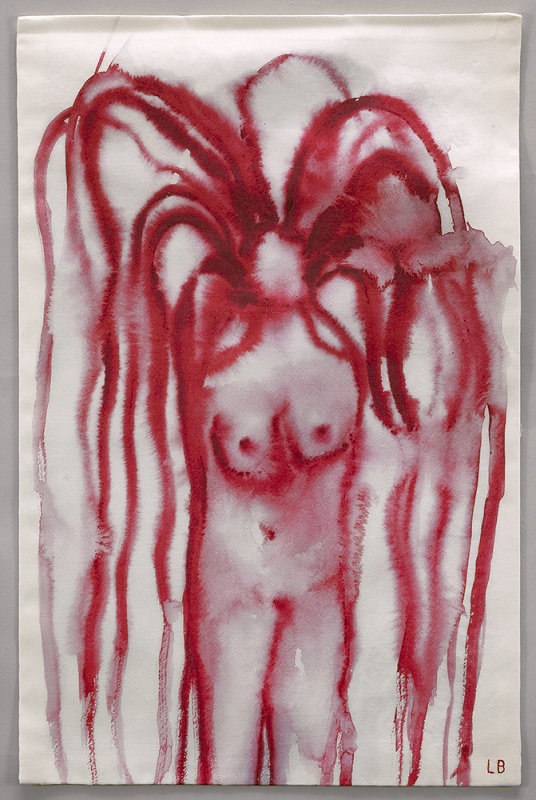 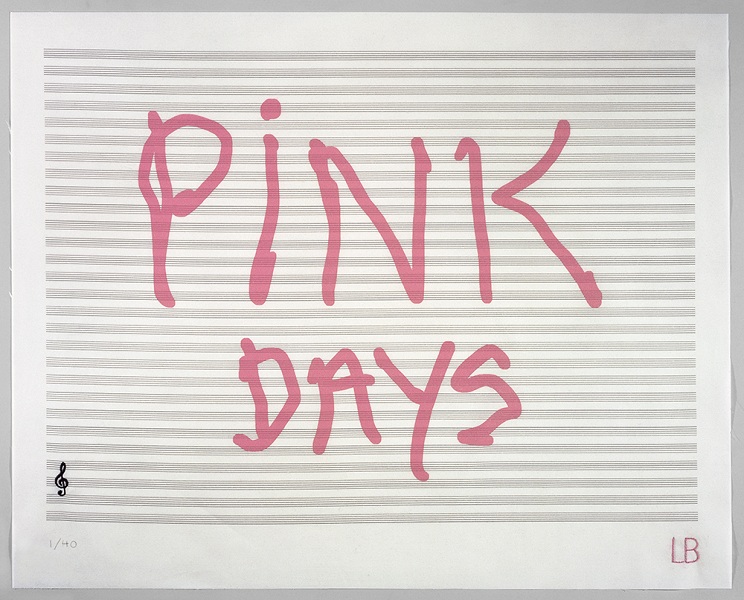